Trump says he will nominate Rep. John Ratcliffe to be director of national intelligence – CNN

Trump says he will nominate Rep. John Ratcliffe to be director of national intelligence 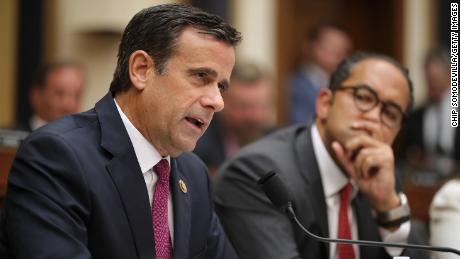 (CNN)President Donald Trump said on Friday that he intends to nominate Rep. John Ratcliffe, a Republican from Texas, as his permanent director of national intelligence, the second time the President has attempted to make the loyalist lawmaker his spy chief.

"I am pleased to announce the nomination of @RepRatcliffe (Congressman John Ratcliffe) to be Director of National Intelligence (DNI)," Trump said on Twitter. "Would have completed process earlier, but John wanted to wait until after IG Report was finished. John is an outstanding man of great talent!"Ratcliffe had been nominated as Trump's pick to be director of national intelligence after Dan Coates stepped down from the post in July 2019, but the Texas congressman withdrew his name from consideration after lawmakers from both parties raised concerns about his qualification. CNN reported earlier this week that the President was once again considering Ratcliffe to be the permanent director.Trump appointed American Ambassador to Germany Richard Grenell to be the acting director of national intelligence earlier this month. He had until March 11 to pick a new permanent spy chief.The choice of Ratcliffe to be the new permanent director, and the earlier choice to install Grenell as acting director, offer more evidence that Trump is looking for a loyalist to lead the intelligence services he has so often maligned during his presidency. Read MoreLoyalty has been something Trump has focused on as he looked for a candidate for the permanent job — during conversations about the role with potential nominees, the President has attempted to assess how loyal they would be to him should they be nominated and confirmed for the job, two sources told CNN. Trump was looking for a pick who would back his mandate, explained one of the sources.The decision to renominate Ratcliffe will dredge up a controversy from the summer of 2019 that rankled lawmakers on both sides of the aisle.Soon after Trump announced his intent to nominate Ratcliffe, reports surfaced revealing the lawmaker had embellished his credentials — prompting swift criticism from Democratic members of Congress.At the time, CNN reported that Republicans also privately raised concerns with the White House about Ratcliffe's nomination.Trump then blamed the media reports for Ratcliffe's decision to pull his name.In the time since that debacle unfolded, Ratcliffe has remained a faithful ally of the President and was one of the members of Congress who Trump mentioned in his victory speech after his Senate impeachment acquittal.Sen. Mark Warner, the vice chairman of the Senate Intelligence Committee, warned Trump on Tuesday against nominating Ratcliffe."I think there was pretty uniform bipartisan opposition to that pick earlier and I don't think anything has changed," the Virginia Democrat said.This is a breaking story and will be updated.Original Article

How Lincoln Project anti-Trump Republicans got into his head. Spoiler alert: It was easy. – NBC News